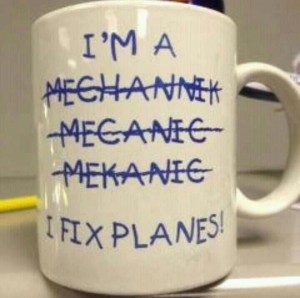 It’s all about this ‘aircraft mechanic’ that could best be described as a walking disaster in his trade. Let’s call him Jim. Jim was not too clever. On top of that his hands would never quite do what his limited mind wanted them to. But he talked the talk and so managed to always get a new job after being fired from the previous one.

If I remember correctly, we first met when he was hired as chief mechanic in the company I worked for. Within months he proved himself incapable of the job and after some fuck-ups was put to work as normal mechanic. I think they finally fired him after he was seen using a boxcutter to cut away paper tape that had been caught under a layer of hardened sealant. On a $30,000 gold film coated heated windshield on a Beech King Air .

Years later I met him again at the same airfield, this time working for a small startup company that apparently was quite desperate to get a mechanic. I worked as a free-lancer for this company from time to time. It was set up in a relatively new hangar by an old should-have-been-retired-years-ago aviation veteran mechanic to do the maintenance for one of the biggest companies on the airfield. Let’s call him Grandpa. Mind you, the work only involved small aircraft. Cessna 172 and the like. But enough of them so enough work to do. The relatively small hangar was equipped with all things needed for the job, including at least 60 fluorescent tubes on the ceiling for good and even lighting.

One day, Jim had a job to do. To change the left main gear tire on a Partenavia. This was a high wing piston twin that many years later I would fly many hours on as a navigator, but that’s beside the point. Jim proceeded happily to lift the left landing gear with a small jack and removed the wheel. The airplane was heeling over to the right quite a bit because of the uneven jacking, but normally this isn’t a problem, provided you take all the required precautions. Like making sure the fuel selector in the cockpit is not in the ‘both’ position.

But let’s not get into details, suffice to say that at this point things were still business as usual and the job could have been done as planned. Unless, of course, after noticing the clock is approaching five, you think to yourself ‘Well, tomorrow is just as good a day as any’. And this is exactly what happened.

Jim dropped his tools, and since Grandpa wasn’t there at the time to tell him otherwise, removed his overall, washed his hands, switched of the lights, locked the hangar doors and went home to spend a lovely evening relaxing with his wife. I met his wife once. Never quite understood how he managed to talk this beautiful thing into becoming his but again, that’s beside the point.

The next morning, Grandpa was first to arrive. In the hallway and office Grandpa noticed the penetrating stench of Avgas. But when he opened the little door that led into the hangar, finding half of the floor flooded with Avgas his old heart nearly stopped. Veteran as he was he immediately knew the situation before him. Avgas, and more precisely the vapor of Avgas is extremely explosive. The slightest spark and Grandpa would find himself at 30,000 feet and likely on his way up to where angels sing and play their little harps.

Very carefully he started placing foot before foot, wading through the fuel, to reach the far side of the hangar. Slowly, he unlocked the sliding hangar doors one by one, careful not to make any spark.
Slowly he started to slide the doors open, inch by inch, to allow fresh outside air to dilute the explosive mixture inside. By the time he started on the second door, Jim arrived at work and came in through the little door from the halway.

“Hiya boss !! Whoa ! What’s going on here ???” he exclaimed, as he flicked the light switch.
60 Fluorescent tube starters went ‘tick tick tick tick tick’ above their heads. Grandpa went white. All blood drained from his face. His heart should have stopped right there, but it didn’t. His face regained color, from paper white to healthy pink. From healthy pink to brightly red. Soon smoke was coming from his ears and a thundercloud formed over his head and if Jim hadn’t been able to outrun this old man there was no saying what would have happened.

Needless to say, not too long after that day once again Jim was out looking for another job. Last I heard he got a job as Scheduling Manager somewhere. Behind a computer. Where he probably also goes from one fuck-up to the next, but at least he is no threat anymore to his own and, more importantly, to any aircraft passengers safety.