Taxi Driver On A Mission 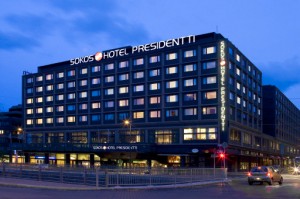 Helsinki, June 2008 – Sometimes you really don’t have a clue what to write about. And sometimes it just gets thrown in your lap. Like today. I had originally planned to write something about the duck pond at my new home, with all the strange inhabitants in and around it. As always, with my tongue planted firmly in cheek. But you’ll have to wait for that one, because what happened today just needs to be written down. It’s funny how an essentially small event can make an impression, such that it warrants all the effort of sitting down and writing a story about it, in a small hotel room in Helsinki. But all things needed for the task are present. Albinoni is filling my room with nice and easy listening music. We just had a very small and ridiculously expensive dinner. The sun is almost below the horizon and there’s a laptop beneath my fingers in this Ikea style hotel room.

So we flew today. Our request for engine startup was slightly delayed by a spiffy little bird that was looking at us, head tilted a bit, as if to say “What are you two up to then ?“. It was sitting comfortably on one of the propeller blades. We couldn’t bring ourselves to so brutally rock this little colleagues world so we proceeded to make some pictures of this brave little aviator. Brand and type unknown, probably a Finnish Black Belted Vodka Tweeter, whatever. During the photo session it got a little annoyed and lifted onto its wings. This allowed us to aim for the blue yonder as well, and after 45 minutes we found ourselves at 20,000 feet with oxygen masks planted firmly on our faces. In the back, a pleasant minus 20 degrees breeze was coming into the cabin through the camera hatch. Aerial photography really can be wonderful. Just not today.
Yesterday  Devin had some problems maintaining a smooth radio communication with the ground, what with the oxygen mask and all, and so many things on his mind. So today I did the radio on this flight. I won’t make a habit of it though. I don’t want to pamper them too much.  Tampere Control, Pappa Alpha Whiskey wants to go home !! Please.

After a tiring flight a short mandatory visit to the Finnmap office. Leena-Maija called me ‘the gift of spring’. As if I’m some sort of strawberry. Spring is here, so in comes Hans. Whatever, it was cute. Shook many hands and discussed some useless items about this and that and such and such and oh dear is that the time and maybe we should be going right ? Outside the office near the train station we found our well deserved taxi back to the hotel.

By pure coincidence quite a number of my stories so far have had a taxi driver as the main figure. Whether or not they thought it prudent to become a pilot at some point in their life. The man we found sitting in front of our taxi would certainly not make it into any flying school anytime soon, although we later learned he was certainly of the type who rarely touches down. His appearance could best be described as that of an escaped death row inmate with a lust for old habits. Old worn leather jacket, thick glasses, something of a beard, scrubby clothes and a disastrous set of teeth. His English was horrible. Sometimes the Fins can be hard to understand due to a heavy accent, but this one also lacked  a decent vocabulary which complicated communication a bit. Nevertheless we could make it clear that we needed to go to the President hotel, in the city center. The man was as nervous as a long-tailed cat in a room full of rocking chairs.  He operated the taxi touchscreen in his car like it was his first time accompanied by some Finnish mumbling and his tongue sticking out a small amount. At last we were moving and quickly found out that his sense of passenger comfort left something to be desired. Fast acceleration, hit the brakes, fast acceleration, HIT THE BRAKES!!. I saw the worried look on Devin’s face, susceptible as he is to carsickness. Myself, I wouldn’t have been surprised to find the original taxi driver’s corpse still lying face down in the trunk of the car. But we always keep a positive attitude, it sure beats walking.

It was rush hour in Helsinki, and where we should have turned right, we went straight. Immediately our inmate-on-the-loose started to explain to us in Finnish-English why this was the case. “Many many cars haha, this actually shortcut haha“. We nodded approvingly but unsure. When, just a short while ahead, we had to stop in a little bit of traffic he got even more nervous than he already was. He apologized about the delay and that it was caused by a car turning left and that it wouldn’t take long. “That is old lady haha waiting haha bad driver haha” and as we drove on he looked back accusingly at the unsuspecting ‘old lady’ who had just turned left. I tried to talk his adrenaline level down a bit by remarking that we had such wonderful weather today. I am not sure if it got through, he mumbled something and let the clutch fly, jerking the car forward again. This guy was so tense it was absurd. I felt like tapping him on the shoulder and saying “Take it easy man…“. Instead I looked out the window and watched Helsinki pass by.

But.. his shortcut worked. And that eased my mind a bit. Once in the city center he turned around to us. “Do you know cards ?” . I didn’t quite get what he meant by that but would have appreciated if he’d keep looking at the road ahead. “Cards changed my life when I was 20. The love of cards saved me. I am 45 now.”  Right…. a taxi driver going on about cards, thats a new one. “Do you believe in cards ?” he insisted. Now I was starting to think of tarot cards. You know, the big gipsy mama telling you you will live a very happy life, but will die a slow and painful death, unless you slip her another dollar. Or would he talk us into a casino next ? An undercover poker joint somewhere in the dark alleys of Helsinki ? “I don’t play cards really..” I said. That didn’t make any sense to him. He kept going on and on about cards. And suddenly he mentioned the name Jesus. That’s when I finally saw the light (ooohh wonderful pun, we’re on a roll today). The man wasn’t talking about cards, he was talking about God ! He just had a lousy pronunciation of this holiest of names.
He was actually trying to make us see the light ! In Finnish-English in a taxi in Helsinki. It doesn’t get much weirder than this. And he went on and on. About God and Jesus and the miracles of days past and even the healed cripple came on stage for a while. As we approached the hotel I told him why I had lost faith a long time ago. That I had the privilege to visit a number of poor countries on my travels. And that I reached the painful conclusion that God, if he exists, didn’t really care for his people, or has been asleep for the last 2000 years. Or, and that is the most plausible explanation for me, God is a fantasy created by man, and is not as such a leading entity worth worshipping. I have no other way to explain the vast injustice and misery in this world.
“Aha but there is also Satan !” was his reply to my unbelievers theory. That’s true, we also have Satan. He did have a point there. But I wasn’t beaten just yet. I asked him why it was then, that the people in this world who are most in need of help have to make do with Satan, and those of us wallowing in wealth and unsaturated fat have the luxury of God. He admitted that something was wrong there. “Is a big problem. But Jesus saves ! You should do test. You say Jesus out loud. And see if answer. You do test ! Call Jesus !!“

Luckily we had arrived to the hotel. Instead of yelling ‘Jesus’ out loud and dreading any possible response I gave him my credit card, worshipped in most all countries of this world. The signature on the little paper took only a second and  I shook his hand, gave him a smile and thanked him for services rendered. In the end, everyone has a place in this world. Just a guy who loves his lord and feels the urge to pass it on to people he meets. Better than those pesky Jesus worshippers that roam the major cities of this world in neat clean suits wearing badges saying “Jesus Saves” and follow you around to shove faith down your throat whether you like it or not. At least we got a nice taxi ride out of this one. Also, his dangerous driving style started to make sense to me now. Jesus guides him like a holy TomTom, and should it go wrong despite of it, he’ll just meet his creator a little sooner. It’s a win-win deal.

In the elevator my mind wandered off to the billions of poor sods that inhabit this world and who have to make do with Satan. As the doors of our luxuriously decorated elevator zoomed open we stood face to face with a hotel girl who was meticulously dusting off the two thousand little leaves of a huge hotel plant. The shiny marble on the floor reflected the obscenity of the picture we saw. Satan. God. On the one hand we have people suffering disease, war and malnutrition because they were born in the wrong place of the world. And here we have a girl uselessly dusting off the leaves of plants to please the rich. It left me with one overwhelming feeling:

Good thing I was born in Holland. Knock on wood !!