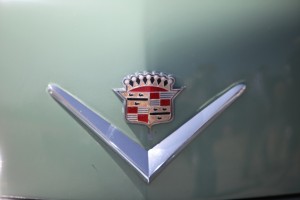 Guatemala City, March 2008 – Parked in front of our hotel in Guatemala city were usually three or four taxies awaiting their clients. All of them white, all of them boring and all of them Japanese. Except one. The Cadillac. As a rule we never used taxies since we had our own car and driver. But on some days we would find ourselves with a car, but without a driver. These were the days that Rodolfo had mistaken the time, suffered a broken alarm clock, was stuck in traffic, had to help a lady give birth in the street, had misplaced his car keys or for some other reason couldn’t possibly reach our hotel in time. On those days we would take a taxi to go to our little flight planning office. And always I was hoping The Cadillac would be first in line. But every time we went outside on those days, The Cadillac would not be there or would be behind another taxi. I feared I would have to leave Guatemala City without ever having experienced a ride in The Cadillac.

But as it happened, one cloudy day came along, flying was not possible and I planned to pass the time by visiting the National Museum. I would need a taxi. To my delight, as I stepped outside of the hotel The Cadillac was there, first of the line, smiling at me. It turned a bit tricky when two tourists in front of me also seemed in need of a taxi. But my mind was made up. Better be rude than sorry and with a mumbled ‘disculpe’ I passed them and headed for The Cadillac. It was MINE MINE MINE !!!! Finally I would experience what our project manager Juha had described to me. A ride in….

It was almost as if a giant crane had picked it up from an American scrapyard and dumped the moaning wreck from 10 feet high onto the tarmac of the Avenida Reforma. That’s how it looked, The Cadillac. The bumpers of this once so proud battleship were dented, twisted and only remained part of this automobile by the virtue of copious amounts of duct tape. The Cadillac had originally been white, so where the grey duct tape would overlap the bodywork and cause a color difference not pleasing to the eye it had been painted with a spray can of white paint. For aesthetic purposes. The fiber structure of the underlying tape gave the whole thing an arty feel to it.

As far as safety related equipment like lights and turn indicators are concerned, with any luck half were still in working order. The rest was declared unnecessary and obsolete without much ado. The rear window was cracked from left to right, its two halves held together by the dark solar film that is almost standard in this country.

Leaning against the Cadillac was El Capitan, commander of this vessel. A short stubby little man with thick glasses and a cheerful grin on his face. Every evening, when we would pass him to go out for dinner he would greet us with Central American friendliness. Today he invitingly opened the door for me. For this he had to reach inside through the opened window. The handle on the outside had sadly been lost years ago. The creaking and squeaking sound uttered by the door hinges was slightly unnerving but once inside it was total bliss. Grey duct tape all over the place. Really the whole interior had undergone a total makeover. Glued on the dashboard a display of pictures featuring offspring and consort of El Capitan in tasteful dark frames. Next to them a collection of Saints and Religious Icons as one would expect in a fundamentalist extremist Catholic stronghold like Guatemala City.

El Capitan turned the ignition key. The sound of the engine, with approximately seven out of the original twelve cylinders still in working order was music to my technician’s ear. All of the semi-attached parts in the ship merrily resonated with the infectious rhythms coming from down below. What happiness! What orgasm of decay! He pulled the lever on the steering column to D for Drive. It’s alive ! It moves! Accelerating to the rhythm of reciprocating pistons and valves our ship set out on the high asphalts of Guatemala City. The faint smell of gasoline in the cabin only briefly prompted concern. After all, easy enough to open the odd window, even if such is accompanied by the sound of fingernails scraping a chalkboard.

And then the driving! Befitting a stately limousine the speed never exceeded thirty miles an hour. By estimate, because the pointer of the speedometer teasingly stayed put on its little pin. Turns and bumps in the road were taken at walking pace. Passenger comfort was paramount it seemed. In reality, El Capitan was securing his livelihood by squeezing every last mile out of this long ago perished shipwreck. Like a true captain his senses were constantly on edge, prepared for any small disaster like brake failure or the loss of any vital component should it choose to part company with the ship under his command. A pothole in the street taken with too much speed resulted in a painful grimace on the face of our Capitan while his ship continued to bob up and down for minutes afterwards in the absence of any serviceable shock dampers. An unsuspecting landlubber could very well get seasick on this ship. But for me, it just gave me a sense of insolent happiness. A mast and couple of sails on it and we’re set !

Accelerating away at traffic lights was achieved with a sensitive right foot gradually encouraging the engine to produce a louder grumble. All ahead full master ! More coal on the fires ! The cacophony of resonating elements gave exactly the right timbre so really there was no need for a working tachometer. I hoped that the National Museum was a lifetime away from my hotel. In a car like this one can grow old, smiling to other road users, waving to pedestrians, enjoying the wake of exhaust gases that obscures the past.

But alas, too soon the crossing came to an end. With a huff and a puff our ship reached its port of call. The National Museum. Thirty Quetzales was the fare and with it the official end of the journey. I half expected a gangway to be lowered while disembarking and suffered a mild landsickness for a short while after stepping onto terra firma. One and a half hour later I left the museum hoping My Cadillac would still be there. But it was not to be. Some fortunate travelers had apparently enrolled before me and were now swaying across the rough seaways of Guatemala City, safely guided by the steady hand of El Capitan.

I hope they enjoyed it as much as I did.