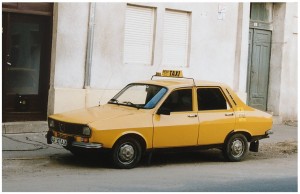 Bucharest, May 2003 – A beautiful sunny Sunday morning in Bucharest, Romania. Casper calls to tell me that today we will not fly. We agree this is a nice opportunity go out and explore the city. We are to meet in the city center near his apartment.

Taking my time I organize some things in my very shabby hotel room before I defy death once more and step into the rickety elevator to go downstairs. I could have taken the stairs, but sometimes doing these daredevil things just gives me a kick. Once outside I spot a taxi at the far end of the hotel parking lot. From a distance it looks a bit beat up but I haven’t been able to spot any new taxies in this country so I’m not worried yet. Almost without exception the taxies in this city are Dacia 1300’s, a Romanian copy of a Renault design dating from the 60’s. In this city there are thousands. Also among the population the Dacia is a widely used car. This must be a heritage from the age of communism. Everybody is equal, except the party leaders.

Coming closer it seems this car has way passed the ‘beat up’ stage. This marvel of technology is held together only by sheer willpower. Brought together by the ideology of the clenched fist and red hammer and sickle, the fact that this hodgepodge of rusty parts still remains on its wheels is a small miracle. The door windows seem to permanently stuck half open since there is no sign of any remaining crank handles.The front windshield is cracked. And when with some help from the inside I open the right door it immediately drops five inches into its rusty hinges.  Old and worn out, tired of the days.

Which can not be said for the driver. In his thirties, a gypsyish appearance and a cheerful apologetic smile whilst I do my best to close the door by carefully raising it and giving it a good pull.

I’m sitting it in what once must have been a proud seat. Filled with the best quality foam and a network of springs that reflected the comfort and resilience of communism as a state doctrine. But that was in the days of the Beatles. As communism finally kicked the bucket, with it went all resilience originally built into this seat, its foam pulverized into dust. What remains is a hammock of worn fake leather on a steel frame. I recall the ‘Comfort Taxi’  logo displayed on the door of the car and smile at the driver.

A wave of compassion comes over me when he asks where we are going. How best to help a poor, wretched automobile like this ? Old and tired of the days, worn and broken with no repair possible ?  I say ‘Piata Universitat’, but really only because I don’t know the Romanian word for ‘junkyard’. I’m sure even Mr. Rouvoet, extremist christian politician in the Netherlands would turn a holy blind eye and approve of the merciful euthanasia of this poor wretched vehicle.

Nevertheless the engine hesitantly comes to life after a couple of tries, raised from the dead like a true Lazarus. All Romanian taxies have a gasoline smell when you enter them. But this one has a particularly thick odor. The Saints glued to the dashboard hold their breath and look annoyed. I’m just happy with the open windows that bring in some fresh breathable air.  Slowly the corpse starts moving. Mirrors are a luxury of a distant past and not at all needed. When you weave into the traffic slow enough everyone else has time to swerve.

Now you should know that the Romanian streets are not entirely the same as the freshly paved black roads that we have in the Netherlands. These streets here were laid by an army of brave workers, letting their deep brown, sweat pearled torsos groan,  chanting communist work songs that honored and served the welfare of the people. But this was in the days of the Beatles. Since then, not a speck of tar or asphalt has been added to these roads. Shake rattle and roll. Potholes two feet deep in the asphalt.  Broken up pieces of road that were barely filled after the work had been finished. Big cracks from left to right that require heavy braking. The best drivers are those who know exactly which side of the road is best, and how fast you can drive across any obstacle without being launched.

The noise in this car is deafening. It seems all parts of it are just loosely connected to each other and take their individual freedom to bang on whatever is closest to them. The braking is always preceded by a sharp bang, followed by a chilling scraping sound. Apparently the driver doesn’t seem to be bothered at all,  so why should I worry ? Only in Hollywood movies do cars shoot through their brakes and explode in a spectacular ball of flames, right ? Thinking of balls of flames the gasoline smell starts to annoy me. And because I have no faith in my door staying closed, during left turns I hold it with my right hand whilst grabbing the bottom of the seat with my left. I realize that in doing so I run the risk of exiting the vehicle seat and all during the next sharp turn.

Now I have to say that all this is not really worth writing a story about. But the thing that strikes me is his very peculiar way of driving. He is without doubt the most fuel efficient driver throughout Bucharest and surroundings. Immediately after making some speed leaving the hotel he shuts off the engine. I give him an inquisitive look which he answers with a friendly smile, abusing the language barrier to his advantage. The road is slightly downhill, so speed maintained is fairly reasonable. The rest of the trip the same happens. Start the engine to make some speed, switch off the engine and let it roll until the motorists around us start pointing at their foreheads, then start the engine again etc. etc.  Greenpeace would be proud. As for me, I am just glad they hadn’t invented the steering wheel lock yet, back in 1960.

Also at every traffic light the engine goes off.  And before I go on I have to explain that the survey crews who have been working here now for a few weeks have invented a new definition of the nanosecond. In Romania, the nanosecond is measured as the time between a traffic light turning green, and the honking that ensues should the ones in pole position not have left yet. But my driver isn’t bothered at all. When the light turns green, he takes his time, starts the engine and we cheerfully chug along on our way to Piata Universitat. It all strikes me as very funny, and since we’re not going very fast I feel quite at ease with this environmentalist avant la lettre. I do hope that one of these days he takes the time to fix that fuel leak. The saints on his dashboard would be so grateful for it.

The ride turns out to be one of the cheapest so far. 25000 Lei,  about 75 euro cents. I give him a big tip. After all, such proud monuments of the communist ideal occasionally need some capitalist help to stay upright.