It’s a warm Friday evening in Bangkok. The last evening the Three Musketeers will spend together. For the occasion, our team is complemented by one friendly ghost. The orange juice and lemonade comes with added salt instead of sugar. All of it adds to the alienation of this evening. Thai food, but please no lemongrass…
In my pocket, a pleasant vibration. I dig out the S&P company phone and read: “There you go. I mailed her your contact info. Not sure if she can pay all of it at once.”

Lassie The Wonderdog On Fire

My very brave and very blonde pilot Robbie is not so very brave this morning. At breakfast he’s reluctantly chewing away on honey crackers instead of bacon & eggs, his watery eyes staring into infinity. I’m guessing he has come down with light flu. Logistically not a big problem, since the weather for today and the next days is unsuitable for photography anyway. After breakfast I tuck him back into his bed with a hot water bottle and a fatherly kiss on his forehead. I am free. And I am in Spain. In my very own Valladolid, no less. The balmy Saturday morning air greets me when I decide to go shopping with my new companion: A brand new iPod, genuine masterpiece of modern technology with color screen and loads of storage space.
Through narrow alleys passing the repugnant fish odour (good morning ladies) of the Mercado Del Val I cross the road to arrive at the Plaza Mayor. It’s been an ongoing party here for the last week. Like a big mardi gras, no doubt in honour of some obscure Saint of which there are quite a few in this extremist Catholic country. For the occasion, the Plaza Mayor has been turned into a genuine concert hall with a huge stage and lots of floodlights in different colours. The city center streets and alleys surrounding the main square have been graced with countless food stalls for tapas, beer and wine. This early morning the terraces are being mopped and the city cleaners are busy clearing the streets and squares of thousands of plastic glasses and other remnants of yet another festive night. Here and there a dazed partygoer wanders around, undoubtedly looking for his recent past, lost forever after copious amounts of alcohol.

I’m having trouble coming back home after two months in Cambodia. In the beginning I could blame the jetlag. After more than a week nobody is buying that anymore. Everybody tells me that I’m so quiet. That I am lacking of my normal vibrant charm (sarcasm alert !). I can see that too, every morning in front of the bathroom mirror. Shaving seems to have become too much of a hassle. Maybe I am trying to hide my inverted smile behind a tough sailor’s beard. Or maybe I’m just too lazy.

Two quick knocks on the door. Seven ‘o clock, dinnertime. Joining Jeroen (pilot, bright green Hawaii shirt) I walk to the elevator like every evening. At the reception I exchange a crispy clean one hundred dollar bill for a wad of filthy Djibouti francs. Pecunia non olet they say, except in Africa. Like each and every night, an important decision has to be made. Just about the most exciting dilemma of the day lately. “Where shall we eat.”. Let’s try the Indian again. We rather liked that place last time we were there, in spite of the somewhat discouraging entree. Passing the doorboy with his eternal professional smile we walk out of the hotel towards the taxi stand. There’s about five of them tonight. According to local protocol we go to the nearest one and ask him if he is familiar with the “Rue Brazzaville”. He answers affirmatively but immediately says “One thousand !”. Well well, that’s new. During the last weeks we had learned never to discuss a price beforehand, instead just to give the driver the standard 500 franc after reaching the destination. And they were happy with it. Are they having a go at us now ? “Non, 500 franc comme normal.” I tell the guy. He starts yelling at us, so we immediately leave the heap of rusted metal he prefers to call his taxi. One of his colleagues just arrives and is interested in being of service to us. But he also immediately asks for 1000 franc. This is starting to smell of a conspiracy. “No thousand, then you walk” the old khat chewer adds to it triumphantly. And as if to deliver a final victorious blow he follows up with a nagging “O you hungry people !”. I’m starting to get a bit irritated on this beautiful African evening. I rather feel like ripping off his side view mirror but discover he doesn’t have any left. He probably lost those a long time ago in The Demolition Derby they call Djibouti traffic. So he gets lucky. Leaving him behind we walk down the whole line of taxis (it feels a bit like strolling down a car graveyard) and start negotiating with one of the last in line. This one also starts out with 1000 franc, but after some haggling we set a price of 700 franc. A good start of the evening and we are starting to wonder how this coordinated mutiny came to be.

Spring 2003 and the first beautiful summer weekend of the year. My girlfriend has announced a full weekend of gardening. Rooting wrist deep into the sticky soil. Planting truckloads of new greens and shrubberies. Countless hours pulling weeds only for them to pop back up the next week. This gloomy perspective leaves me no other option. Escape Plan A has to be put into action: A nice, relaxing weekend of singlehanded sailing ‘Blue Baron’. END_OF_DOCUMENT_TOKEN_TO_BE_REPLACED

Love of my life 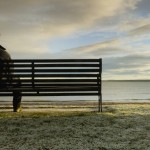 I was a boy, fourteen years old when we first met. I remember everything like it happened only yesterday. The careful first approach, the first eye contact. A shy touch and then, faster than I could ever have imagined, the first kiss. Ah, I remember it so well, there, out behind the school playground.  END_OF_DOCUMENT_TOKEN_TO_BE_REPLACED 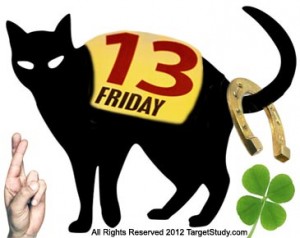 Valencia, May 2002 – Fortunately, I’m not superstitious. I am writing this email being at ease and at the thirteenth floor of our Spanish apartment building. Young Master Jan (calls himself a pilot) has gone to the supermarket, so we have some time to spare. In the CD player a disk with a bunch of Partita’s, written by good guy Bach. Glenn Gould is doing the handiwork. END_OF_DOCUMENT_TOKEN_TO_BE_REPLACED 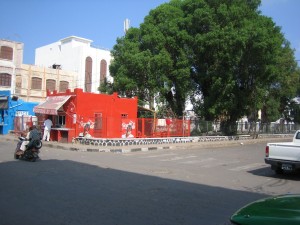 Djibouti, December 2008 – Yes, the Pearl Of Africa, but it certainly could benefit from some improvements.

We flew here under a beautiful starry sky. During the flight I saw two falling stars and made a beautiful wish for each one of them. In hindsight one of those wishes should have been for hot running water, a luxury I have had to do without for the last 10 days. A luxury also that is painfully missed. Early morning stepping into an ice cold shower is just not my thing. END_OF_DOCUMENT_TOKEN_TO_BE_REPLACED 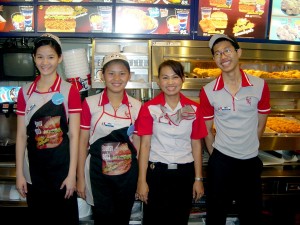 Bangkok, March 2007 – Happiness is not something that you stumble upon by chance, nor is it dropped into your lap by divine providence. No. Happiness is a thing that you pry from the clutches of The Universe by force. It’s very much a cliché, but also a very accurate description of what I experienced today. This morning in Bangkok I woke up with a big fat grin on my face. Not so much because of things to come. The departure of Jeroen and Sig without me. The long long flight on a crowded airliner to Amsterdam that I wasn’t looking forward to. All this didn’t make me happy at all. No, I awoke happy this morning because I suddenly remembered how very fortunate I am. END_OF_DOCUMENT_TOKEN_TO_BE_REPLACED

Tintin in the land of the Maya 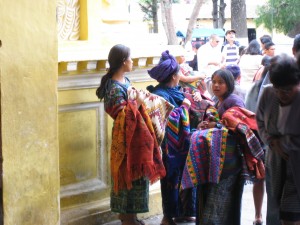 Guatemala City, February 2006 – It’s good to hear the Spanish language around me again. You can be homesick for your motherland. Or the place where you used to live. I knew that. But can you also have the same nostalgia for a language? Even if it is not your own? I just realized how much I have grown to love the Spanish language. A language that is invariably associated with many hand gestures and a lively melody. Somewhat disturbing is the knowledge that the vast majority of the Spanish speaking population in this rugged country is in possession of a gun. A bit of a false note in the melody let’s say. Nevertheless, I am thoroughly enjoying my stay here, already a month now, and writing this I look back on an eventful and international year. END_OF_DOCUMENT_TOKEN_TO_BE_REPLACED