Posted by hanswrites on November 4, 2013 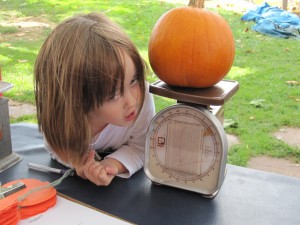 Teuge, September 2008 – Once a year it is ‘Braderie’ in our village. It is a sort of a mardi gras where all the local shop owners install little stalls in the streets. In these you find fun little games for the kids and lots of watery beer in plastic cups for the parents. And the ‘pièce de resistance’ of the whole event is the annual Pumpkin Championship. Pumpkins are entered into the championship from all around the small community and on the last day these are measured by a team of wholly unbiased judges. The one who has managed to grow the biggest pumpkin in the months preceding the event will become the winner of the Pumpkin Championship. He or she shall be gracefully awarded a nifty price sponsored by the local shop owners. A box of paperclips from the bookshop, two pounds of the highest quality minced meat from the butchers, a fine loaf of white bread and a bag of tasty cookies from the baker and so forth. But more important than all, more precious than any of the other prizes is of course acquiring “The Honour” and to be awarded the little bronze medal in front of the cheering audience.

Over the years the Pumpkin Championship has developed into an annual main event of great importance amongst the local youth. Tens of little children start early in spring to plant their Winner. And under the competent guidance of mum and dad the little seed starts to grow bigger and bigger. The exact spot in the garden where the Winner is located is shielded from prying eyes and completely off-limits for friends and relatives. Spying on each other’s pumpkin has been the cause of major neighborhood unrests. Month after month the ugly thing is nourished and pampered with everything that is supposed to make it grow even bigger. It is vigilantly sheltered against too much sun and too much rain, too much wind or any pests that might damage it or hamper its growth. In dry times the little kids venture out, armed with bucket and garden waterer, to defend the honor of the Family. Every day daddy enters all the measurements in his spreadsheet and awes his wife and children with a colorful graph that flashes on screen at the click of the mouse.
As mentioned, it was an annual event of great importance. Was. Until my friend Rinus decided to meddle with it. Friend Rinus is a dilletante with a wide interest. In the many sheds behind his house he messes about with old cars, tractors, engines and more of those things. Day and night. With the obligatory cigar butt on his lip he rummages around his house and premises, dressed in a hopelessly dirty overall and a filthy greasy cap on his slightly balding scalp. If he’s not messing about around the house, he is working the land. He runs a little tree nursery that provides for the necessary funds of living. Christmas is the peak of his financial season with all the people of the village buying a christmas tree from him. Good quality at a good price. Friend Rinus knows the meaning of fertilizing. Rinus knows how to tell bad soil from good soil. Rinus knows, in short, how to grow stuff. Quite understandable therefore that Rinus, always looking for another challenge, decided one day to plant a little pumpkin seed in the corner of his nursery.

Braderie 2001. Friday afternoon. Roughly around three PM almost the entire village population gathers on the main square. Baker Roelofsen, assigned Speaker of todays event asks all competitors to bring their pumpkins and lay them around the big party tent in the middle of the square. When all pumpkins are on display the enormously proficient jury shall declare a winner after performing their careful measurements.
In nervous anticipation the little children bring in their prizewinners. And if the pumpkins are too heavy or the children are too small there is always daddy to lend a helping hand. It seems like there is not a worry in the world, and nobody notices the dark clouds that are building over the little village, soon to wipe away all the sunshine radiating off the happy children’s faces. More and more pumpkins are laid on display around the tent. Some are pitifully small (bad soil, Rinus would say) but the bigger ones seem to measure at least 50 centimeters across, maybe even more, and are quite heavy too judging by the pearls of sweat dripping from daddies forehead.  Some students from a local school of music play some light instrumental songs to please the attendants.
And then it happens. From behind the audience starts a little unrest when some loud honking fills the air. The audience splits like the Red Sea of Moses as the old beaten up Mercedes driven by Rinus darkens the sky with its smoke bellowing exhaust (Rinus thinks it has to do with the injectors but I think that the engine died a long time ago). Rinus backs up his car and trailer towards the party tent and switches off the engine. Rinus, cigar butt on his lip and his cap a little crooked on his head, gets out of the car and pulls an old horse blanket from the pumpkin strapped on the trailer. And a Pumpkin it is. At least a meter in diameter. Bright orange with some green stripes. It looks like it was picked from an idyllic fairytale where it once did service as a magical coach pulled by three white horses. It is so heavy that two strong men are needed to carry it from the trailer to the party tent. A tear rolls down a peachy soft cheek and makes a tiny wet spot on a little girls summer dress. More of those are sure to follow. Between the parents some mumbling arises. “Not fair”. “Ridiculous”.”Spoilsport”. But it doesn’t bother Rinus one bit. He drives his Mercedes around the corner and comes back to attend the judgement.

Just for appearances the jury starts its work. A few of the biggest ones are measured, but anyone can see they are totally out of proportion compared to the monster that Rinus just delivered.
“I have another one at home, slightly bigger, but this one is just a bit prettier” Rinus whispers to the man standing next to him.
At the final prize ceremony there is noticeably little applause. But cheerful Rinus’s happiness doesn’t suffer because of it. With a big smile on his face he loads his prize, medal and “Honor” into his mercedes and drives home singing, leaving the disappointed audience in a thick blue cloud of diesel smoke from which here and there some soft children’s weeping can be heard.

In 2002 more or less the same thing happens. Again Rinus arrives in his mercedes and trailer, on which is strapped a pumpkin even bigger than the one of last year. But now clear voices of resentment are heard within the audience. And no one applauds as Rinus accepts his second prize. In the spring of 2003 Rinus receives an official letter from the Braderie Committee 2003, signed with a graceful autograph by the mayor himself. In it, Rinus is asked to refrain from entering another pumpkin this year, out of sportsmanship and compassion for the children of the village. And it is this paper, accompanied by the two medals and some snapshots that now decorate Rinus’s mantelpiece.

“The Honor” has found permanent residence in Rinus’s living room.

Posted under General and tagged with braderie, championship, pumpkin
Comments (0)