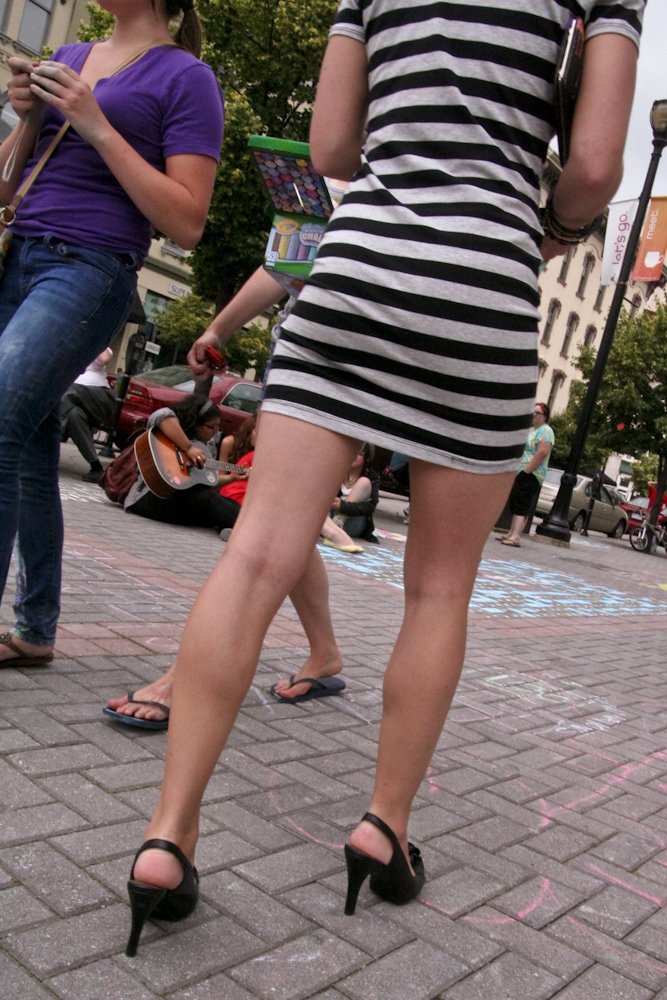 Kaunas, July 2006 – “Man look at those legs !  And each and every one of them you know. Jesus Christ. There must be something in the water here…”
Thus sighs an unnamed pilot on a cafe terrace in Kaunas, Lithuania, the hot summer sun an accomplice to the suffering that takes place under its rays. Like  diabetics in a Belgian chocolate shop, five Dutch guys are having a cup of coffee on the promenade in Kaunas. You can look but you can’t touch. A few meters away a steady stream of bonbons parade the main street,  almost without exception wrapped in tight miniskirt and matching top. High stiletto heels, long blonde hair waving in the warm summer wind. In the beginning the dress code here seemed a bit slutty but we got over that pretty quick. In the Female Beauty department Lithuania is more than richly endowed, that fact has been proven without a doubt. Women and girls that possess a kind of striking beauty only sporadically seen in the Netherlands crowd the streets of Kaunas. And this boulevard is clearly the hotspot. So we look. No amount of Insulin could ever cure our disease. With jaws sinking ever deeper into our laps, on occasion dabbing the drool with the paper napkin that came with the coffee we conclude that we really do have a very tough job, but not today. According to Lex who did some preliminary ethnological fieldwork there is quite a female surplus here in Lithuania. We have no problem with that. Competition is good. Especially if this war is being fought on the public street using an arsenal of infinite legs and tightly wrapped breasts enjoying the exuberant freedom granted to them.

Somewhere in the street a car alarm goes off. That’s a story in itself. The story of the car sirens. It goes as follows. Obviously all those Audis and BMWs driving around here at some point were stolen from the Netherlands. Now in order to ensure that we can’t steal them back, they immediately install a car alarm. With a remote control. With which you can make the car say ‘beep beep’ or ‘bee-eep’ at will. In the parking lot of a hotel this quickly grows into a melodious concert during the quietest hours of the night. In addition, the adjustment of these devices is usually set so sensitive that it is impossible to discretely de-pressurize oneself after a hefty Cepelinai meal without at least three cars in your immediate vicinity starting to scream and flash.

Anyway, we digress. So I am in Lithuania and I don’t smoke anymore. Yeah, it was a struggle, but I’m finally rid of it. I see you look at me in disbelief. Because you think “Ah yes, again? ‘. And I understand that. Yes, again. But this time for real. I’m done with it. Final. No more. Finished.
Let me explain: I flew to Lithuania with a regular airline. Well, that is to say if you want to place Air Lithuania in that segment. What I mean to say is I didn’t fly here with one of our own planes. I flew a normal airliner. I had reserved a seat on the aisle and so had been appointed a window seat. Fortunately, the plane was not full, a family with baby wanted to have my seat and I could change to a seat besides a somewhat less than skinny but joyous looking man. Each with our newspaper unread on our laps we spent the next two and a half hour chatting away. About anything and everything, but of course most about our work. He is a cardiac surgeon. An airplane surgeon and a cardiac surgeon. You couldn’t make it up. He did not understand why I smoked, I did not understand why he flew. We spent two and a half hours scaring the shit out of each other He explained what can happen to your heart if you smoke, I told him about all the strange things I’ve experienced in a lifetime of aviation. He arrived in Kaunas with a fear of flying, I arrived with smoke-o-phobia. He will return to the Netherlands by trolleybus, I will never smoke again. That silly plumber with his bypasses and dotter methods helped me a lot.

Of course I came to Lithuania to do something, and I succeeded. On arrival at Vilnius airport four men were waiting for me in their snazzy black rental BMW. Narrowly avoiding a self igniting Volkswagen Jetta on the highway we arrived safely in Kaunas where I experienced one of the strangest sensations of my career. I woke up early morning with radiantly beautiful weather. Both planes were going to fly. And I pulled the bedcover a bit higher and went back to sleep smiling. This time I was not a Navigator. This time I was a Mechanic. Mechanics without aircraft are unemployed. Unemployed Mechanics can sleep in. Wonderful. After an elaborate and very late breakfast I checked into another hotel like we discussed the evening before. It was better and cheaper, and situated atop a hill overlooking the city. There was a very long staircase with about 500 steps leading up the hill to the hotel. These are the times when you find out exactly what smoking does to your health. Panting like an old horse, I kid you not.

That afternoon we had a drink at a small marina on the quay. A little further down they were doing bungee jumps. We were commenting on this guy that climbed up there, and after 10 minutes of looking down refused to jump. We all fully agreed that it would be quite stupid to trust a piece of old communist rubber band to stop you from making another crater in the concrete below. No one in his right mind would even consider that. Right ….. ?  Niels was looking at the scene and casually remarked “Well, I wouldn’t pay for it but if it was free I guess I would try it….” whereupon the rest of us immediately pulled out the required money and offered it to Niels. We all left our drinks and proceeded to the execution site. And it must be said: He faced his destiny as a true hero. An example for us all. Steady rock in the turbulent high seas of Dutch Heroism, our Niels. The rubber band remained in one piece, keeping Niels’ brains from being shattered on the asphalt. In so far as pilots possess brains, of course. Anyway we did shoot a nice movie from the whole thing. A valuable memento of Niels’ bravery in far away Lithuania.

Two days later I did the required maintenance of the plane together with Niels. On a run down small airport in a hangar full of very annoying little flies. The inspection was completed without any problems and afterwards we rounded up financial matters with the director of the airport in person. In a grubby office that seemed to have been copied out of some bad Soviet movie. In the future, he said, we could use his airport as a base, rather than the main airport of Kaunas. Fuel he could arrange. Parking would cost almost nothing. He even had apartments where we could sleep he said. With a glint in his eye he informed us that he could also arrange some ‘nice ladies’ to bring us breakfast. I was guessing that in this event we’d have to kick them out of bed first. But his story certainly was convincing enough for us to consider.  Perhaps next time, after studying some enlightening photographs of certain parts of the package he offered, we could come to a good deal

And so now we’re back on a terrace in Kaunas, enjoying the surplus of delicatessen passing in front of us. Ok, I’m lying. Actually I’ve long left Kaunas and now find myself in cold and rainy Helsinki. But that is the freedom of the writer. He can always pretend he’s somewhere where he is not but maybe would like to be. And since this story will do its rounds between girlfriends and wives of the pilots and navigators who played a role in it let me make something clear. Not everything you have read is necessarily true. Some things might be somewhat exaggerated, some other things understated. Some things were not even mentioned. Like our infinite loyalty to you, our better halves. And our willingness to protect each other from any possible slip in these difficult circumstances. In short, I was just bullshitting a bit and it is up to you to find out what really happened. In Kaunas. This spring.